Sounds from a bygone Age Vol. 3 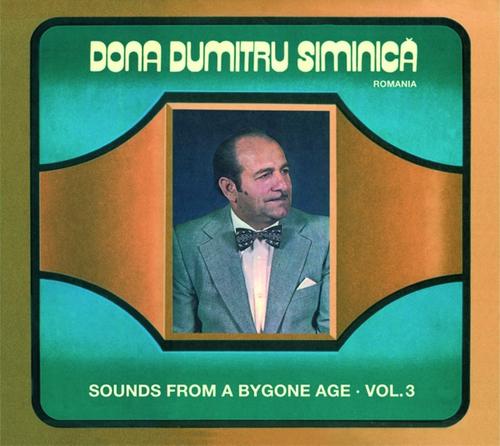 When Dona Dumitru Siminica sang "cantece de pahar" (drinking songs), "cantece de jale" (laments) or "cantece de dragoste" (love songs) in the Bucharest garden café "La Chirigiu" or in the luxurious Opera restaurant, the tables filled with guests almost as quickly as the glasses with tuica or wine and the patron's till with Lei. For Dona Dumitru Siminica sang Romanian blues from the suburbs, delicately ornamented songs weaving between sorrow and trance, slow, never-ending ballads such as "Cine are fata mare". Songs which offered consolation to the lonely, tended the wounds of the lovesick, and prepared those newly-infatuated for the end of their love. With his dramatic falsetto voice Dona Dumitru Siminica could hardly sing cheerful dance tunes. Dona Dumitru Siminica was born in Targoviste in 1926. His family came from this provincial lautari stronghold not far from Bucharest and was attracted to the capital by the building boom between the wars. Siminica's father worked on building sites during the day and played his violin in the evenings in the suburban restaurants in Herestrau and Floreasca. At that time the Siminica family lived in the same yard as the Gore brothers, who Dona Dumitru Siminica later performed with at weddings. The young Gypsy inherited both the talent and the instrument from his father, trained as a bricklayer and spent a long time working as a site manager, singer and violinist, before establishing himself as a freelancer in the music scene in 1962. Siminica had a disturbing, androgynous falsetto voice and a large number of female fans who hung on to every word uttered by the man in the bespoke suit with the immaculate hairstyle and carefully clipped moustache for nights on end. His songs fell out of time, creating a soulful centre of peace countering the noise of the factories. This repertoire of quiet suburban songs (muzica lautareasca) ideally suited the cultivated musician's introverted character. As early as the late forties the Bucharest public wended their way to a restaurant at "Amzei" market, more to hear Siminica's high voice than his skill on the violin: After all he mainly sang melodic, richly ornamented melismatic love songs there, which had been fashionable in the salons of Wallachian boyars back in the 18th and 19th century. Urbane Romanian music had always helped itself to Greek and Turkish culture, because Bucharest was, in addition to Romanians, also populated by Greeks, (OHNE:from Istanbul) Turks, Armenians, Jews, Aromanians and Gypsies. It was not until the 20th century that the Romanian middle classes began to orient themselves culturally towards Western Europe, before the mainstream then radically veered towards cheaply produced Orient pop after 1990. Dona Dumitru Siminica was first called upon to make recordings for the radio in the fifties -he was also part of the inner circle of informants on the repertoire of the urbane Gypsy orchestras known as tarafs in the Bucharest Institute for Folklore. Whenever he sang there, several of his friends were always waiting in the Institute's courtyard, ready to help Siminica drink his earnings in a nearby café after the session. The accordion player Faramita Lambru was also a regular guest at the Institute. Lambru, the great Maria Tanase's favourite accompanist, played classics with Dona Dumitru Siminica such as "Afara e intuneric" and "La salul cel negru", which are released outside Romania for the first time on this CD. For his best recordings Dona Dumitru Siminica assembled a Lautari dream team around himself, including Marin Marangros (cymbalom), the Bebe brothers and Costica Serban (acc.) and Grigore Ciuciuc (bass). Siminica once came only with his favourite accordion player Costica Serban and a violinist to the Electrecord studio, getting the missing bass player from the nearest pub by the old market halls, which later yielded to Ceausescu's uncontrolled demolition mania. It was a sensation and only due to a short cultural and educational policy thaw that a few records of urbane music with Gypsy lyrics found their way into shops in Romania in the seventies. At that time Dona Dumitru Siminica was the most widely exposed singer of muzica lautareasca and only he and a lesser-known singer were able to record a few songs in Gypsy language at Electrecord. Dona Dumitru Siminica was respected and admired by Romanians and Gypsies alike, because he was able to sing songs from both communities. Other singers, such as Victor Gore or Gabi Lunca, didn't trust themselves to sing in Gypsy language, but Siminica always gently resisted the increasing pressure towards assimilation in the seventies and eighties. "Lelita floare" about a man whose wife has run away, but he cannot live without her, or "La salul cel negru", in which a man who is head over heels in love realises that his beloved loves another, became his songs, just like "Osoreia osbaro" in Gypsy language, in which a man bemoans his poor health. He has many children to feed and doesn't know how he will cope. For that reason he enviously sings of the "forest that is beautiful, healthy and bursting with energy". Until this day hardly anyone in Bucharest attempts to sing these songs, which Dona Dumitru Siminica made so famous, that "Cine are fata mare" turned up on a Bregovic soundtrack at the beginning of the nineties. At the beginning of the eighties Dona Dumitru Siminica was found dead in the staircase of his building in Bucharest's Grivita quarter. On the morning after a wedding his heart had just stopped beating. His death did not make the headlines in the Romanian party-controlled press and to this day he is only known abroad by insiders. However, like the majority of Romania's great Gypsy musicians from the vanishing Lautari scene, there are no recordings, no interviews, and no books about this extraordinary singer, who moved in a relatively untouched niche world outside the state-sanctioned and highly stylised folklore. Nothing can tell us more about the phenomenon of Dona Dumitru Siminica than his songs, which bring back the sound of old Bucharest before it is completely forgotten.